Antonin Artaud (born in Marseille in 1896, died in Paris in 1948) developed – through what he himself called the Theatre of Cruelty – a new form of theatre art in which the importance of the spoken word was minimised. Actors were to let themselves be carried away by a combination of unusual sounds and physical movements in a context characterised by the elimination of the usual stage devices and props.

This situation was described by theoretician Allen S. Weiss thusly: “[…] where theatrical events would no longer be subordinated to a written text, as was the case with Western theatre up until that time. This [Theatre of Cruelty] was to be an anti-naturalist, antirealist, anti-psychological theatre, where screams, cries, groans, and all of the dissonant sounds of the human body would bear equal importance with the written word, and where language itself would be utilised as a sort of incantation to create a theatre of dramatic and curative magic.”

In theory, Artaud’s concept was based on the idea that language limits the spirit’s capacity to reach pure sensations, which are enslaved by the principle of reality. To counteract this influence, Artaud proposed a type of theatre in which all vestiges of language were eliminated and where the actors, who were almost nude onstage, expressed themselves through movements and actions. These ideas were essentially presented in his 1938 book The Theatre and its Double. Although Artuad’s chronic illnesses (both physical and mental, in part the result of a case of childhood meningitis) prevented him from putting his ideas into practice, the concept of a sound shape – albeit partial and tentative – can be found in his 1947 radio play Pour en finir avec le jugement de dieu (To Have Done with the Judgement of God), from which fragments continue to be extracted.

The radio debut of Pour en finir avec le jugement de dieu (To Have Done with the Judgement of God) was programmed for 10:45 p.m. on Monday 2 February 1948, but it was cancelled the day before its scheduled airing. The director of Radio France refused to allow the piece to be broadcast due to, among other things, its scatological content, combined with its anti-Catholic and anti-American proclamations.
Therefore, it was not possible to debut this composition on the radio (it would only be broadcast on Radio France 30 years later), nor was it possible for its creator to hear it on the radio, since Artaud died on 4 March 1948. His death, then, marks a work doomed to fail to put an end to, or have done with the judgement of God. 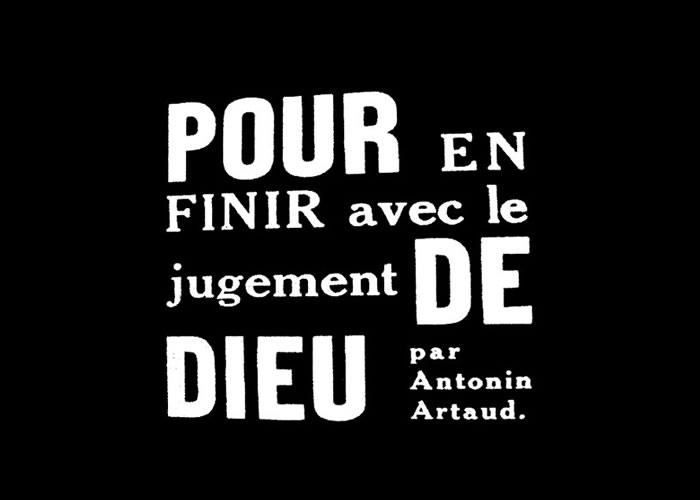