In the exhibition Defiant Muses. Delphine Seyrig and the Feminist Video Collectives in France in the 1970s and 1980s, the Museo Reina Sofía assembles a set of documents which imparts an alternative reading of the history of film and the hegemonic visual culture linked, on this occasion, to the staging of gender in the 1970s and 1980s. The show’s curators, Nataša Petrešin-Bachelez and Giovanna Zapperi, have revolved the exhibition around actress and activist Delphine Seyrig (1932–1990), a figure which brings into focus the role of the feminist video collectives of which she was a part.

In the interview, the curators touch on how the actress’s career unfolded, from her roles as a muse in films that idealised her from the male gaze, to other more emancipatory roles which stage women who are distanced from those ideals, depicting other female roles and representing other models. Thus, Seyrig moved closer to the sphere of feminism from her own field of action as an actress, working with film-makers such as Chantal Akerman and Ulrike Ottinger, and from behind the camera as a producer alongside friends like Iona Wieder and others with a background in political activism and the press, such as Carole Roussopoulos. In fact, it was Roussopoulos who introduced her to the video camera and, along with Wieder and others, they would form the collective Les Insoumuses (Defiant Muses), enabling them, through activism, to cover and give a voice to feminism’s social movements, using the camera as a way of recording — from a philosophy of listening — the causes of women and minorities.

This activist side of Delphine Seyrig remains largely unknown, as does the work of French feminist video collectives — often forgotten, not only in the history of film but also in the historiography of French feminism, with more priority given to the significant theoretical contributions of Luce Irigaray, Julia Kristeva and Antoinette Fouque. However, the work of these collectives by dint of visual culture has not fallen into obscurity due to the key aspects of feminism — care, preservation, dissemination — Seyrig and her collaborators created in the 1980s at the Centre audiovisuel Simone de Beauvoir, which conserves and disseminates all of these documents. 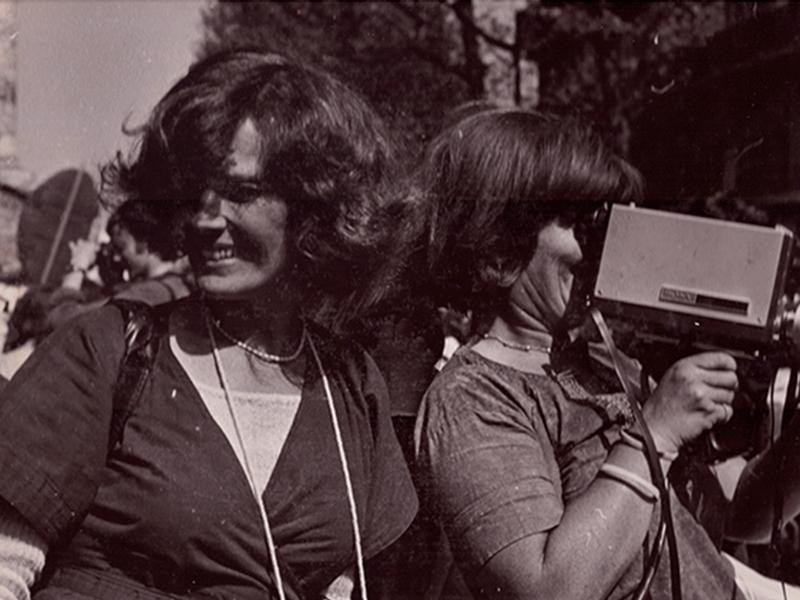 View of the exhibition Musas insumisas. Delphine Seyrig and the Feminist Video Collectives in France in the 1970s and ‘80s